Over at the Huffington Post, Andy Borowitz trots out the old joke: Comic-Con Offers Attendees Rare Glimpse of Women:

SAN DIEGO (The Borowitz Report) -- Thousands of comic book and sci-fi aficionados descended on San Diego for Comic-Con this week, all vying for the opportunity to look at or even stand near a real woman.

Ha. Not only is this joke about as stale as the "Pow! Biff! Holy [insert bad pun here], Batman!" headlines, his version is rather lame and lazy. Of course, the Onion did it much better, back in 1996.

How about "Comic Book Fan, Dressed as Normal Human Being, Wins Cosplay Award"?

To which I say, "DUH." The everyday stuff I can find at my local shop or eBay. When I visit a convention, I want stuff I've never seen. A complete run of Marvel Age magazine. (Worth the price for "Mark's Remarks" alone, as well as a historical time capsule.) A bottle cap with Uncle Scrooge on the inside liner. Bizarre comics from the newsstand era, like "Superman Meets the Quik Bunny". Graphitti editions from the 1980s. Eclipse hardcovers. I want Wong's Lost and Found Emporium, not Wal*Mart.

Instead, I usually see the same clearance items, the same hardcovers and trade paperbacks at each retailer. I understand that conventions bring in a lot of customers into a small area, I realize that it's a great way to move unwanted merchandise, but I'm looking for the interesting. I've actually had trouble fulfilling the 3-for-2 specials at these vendors... that third volume, I have to search for something that's worthwhile. 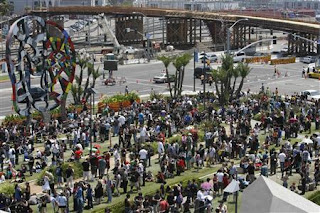 Reuters reports that more families are attending Comic-Con. The traditional generational shift is one reason (fans involve their children in activities), as is Hollywood's presence at San Diego.
(At left, an image from the Reuters article, showing fans lining up Friday morning.)

Here's the link to AP photos. Most are celebrity photos, but there are a few cosplayers. (Angela Min, enjoy your fifteen minutes. Or is it Lorie Wheeler?) Yahoo News has a wider selection (Reuters and AP)


MGM is remaking "Red Dawn"? And fans are excited that Kurt Russell (The King of the B-Movies) is involved? Okay. If it makes you happy, enjoy. At the very least, he has more geek-cred than most actors appearing at San Diego this weekend. (And here is the Comic-Con coverage from IMDB.)


Lev Grossman, over at Time's Nerd World blog, reports on the Warner Bros. panel, and other aspects of San Diego. An enjoyable blog; I shall follow.


Friends of Lulu Legacy: Lindze Merritt turns cosplay experience into successful fan business! (Lots of cheesecake photos of Ms. Merritt, wearing her own creations. Do read the words next to the pretty pictures!) (If you want REALLY sexy fangirl cheescake, try this.)


Toy Story 1 and 2 will be screened as a 3-D double feature this Fall before Toy Story 3 premieres next Summer. Beauty & the Beast will be 3-D'd (3'd?) as well, and Pixar will air a Christmas special on ABC! (And Thursday, Tron: Legacy was presented.)


And, of course, fair and balanced reporting from the Onion. Who knew J.D. Salinger was a Terminator fanboy? (And if you live in China, please to click here.)
Posted by Torsten Adair at 2:59 PM No comments:

Real Life is for Those Who Can't Handle San Diego

Again, I was scanning Google News today for news from San Diego, but nothing really excited me.
Until... I saw a link from the Wall Street Journal featuring a photo from the San Diego Comic-Con. Curious, I clicked the link. 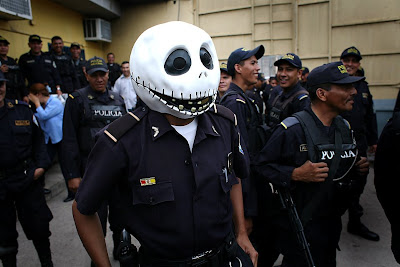 And discovered many photos which could have been from San Diego, but were actual news photos from around the world.
Which shows just how unusual the world is.
Posted by Torsten Adair at 6:02 PM No comments:

Two years ago, I read about the craziness surrounding Hall H at the San Diego Comic-Con (I expected the Red Cross to show up with relief supplies). Last year, like this year, I avoided the Con because it was too crowded, I had no business to discuss, and there were other, more local conventions to attend. Also this year, like last, while working, I periodically updated Google News ("san diego" comics) to see what was new and exciting. (I'll repeat my other strategy, of using the money saved on airfares and hotel rooms to purchase swag on eBay without having to fight for Con exclusives, next week.)
Here are today's interesting points:
Posted by Torsten Adair at 6:15 PM No comments:

When the moon shone, we did not see the candle. 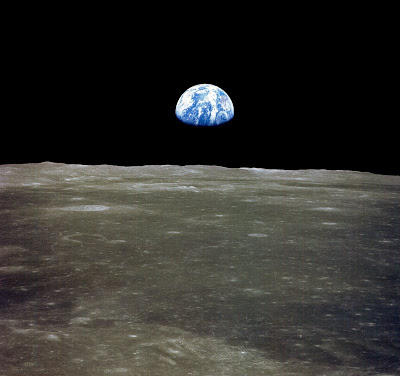 I am a bit of a space geek. While I never launched model rockets, or memorized constellations or mission data, I do have an interest greater than most people. (Although I did wear space patches on my jean jacket in high school.)
Born two weeks before Apollo XI landed on the Moon, it always held a fascination. I think Star Wars and Star Trek and Battlestar Galactica fueled that somewhat, but the achievement and the promise of space exploration really grabbed my imagination.
So... a few links to touch upon this historic event. I hope you remember where you were forty years ago today, and I wish that we will see a return trip to the lunar surface soon.
(And to the thousands of people who made the Apollo program a success, thank you.)
First, CNN reports how a ten-year-old living in Guam made a quick repair to a NASA communications antenna just before splashdown.
Over at the New York Times, Tom Wolfe reflects on how the succes of Apollo XI was also NASA's greatest failure. The Times also chronicles those who consider the entire mission a hoax.
An interesting counter-point to the nay-sayers, is the Bad Astronomy blog. I discovered this blog last February, when "archival" photos from the Watchmen movie were posted, and the blog began to critique and correct problems of the picture showing Dr. Manhattan taking a picture of an astronaut on the Moon.
Wonder how powerful the computer was aboard Apollo XI? Dr. Dobb's has a nice analysis of the pioneering technology. Of particular note:

Simpler systems are inherently easier to program, maintain, and fail less often. As Gordon Bell, father of the minicomputer at DEC has often noted: "The most reliable components are the ones you leave out."

The Charles M. Schulz Museum showcases Peanuts contribution to NASA with a special exhibit. Many know of Snoopy and Charlie Brown's involvement with Apollo X. Fewer know that Snoopy also sponsors one of the most prestigious awards that NASA bestows.
And, a look to the future of manned space flight. And a message in a bottle.

Posted by Torsten Adair at 6:19 PM No comments: 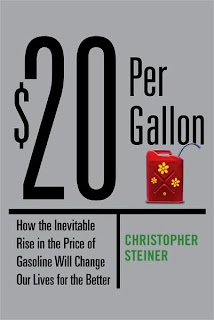 $20 per Gallon: How the Inevitable Rising Cost of Gas Will Change Our Lives for the Better by Christopher Steiner.

This book is well-organized, provides some interesting hypotheses, but the thesis is tilted towards an optimistic utopia, ignoring or not considering other outcomes or possibilities.

The author gives no mention of E85 gasoline (gasoline which contains 85% ethanol), flex fuel motors, and the genetic modification of plants to produce more ethanol. What of agricultural plants which recycle animal waste and methane to fuel factories?

The author suggests that Walt Disney World will cease to be as airlines fuel costs make air travel expensive, although he does foresee high-speed trains and electric cars. (How many people live within a four-hour drive of Disneyland and DisneyWorld?) Wal*Mart will disappear in a puff of smoke as shipping costs will reduce cheap imports, although domestic production will replace foreign goods, people will still drive locally with electric cars, freight trains will continue to move goods, and trucks will either use clean diesel fuel or compressed air.

As energy costs rise, the author suggests that outlying suburbs will wither and vanish, replaced by local produce farms. Won't the affluent voters in these suburbs convince government to extend public transit to their neighborhoods, just as trains and trolleys connected Westchester County to Manhattan in the early 1900s? (Curiously, the author does not refer to the abandoned houses of Detroit as an example or urban retro-fication.)

The biggest hypothetical which the author fails to analyze is inflation and the economy. As fuel costs rise, how will it affect the economy? Where will funding for high-speed rail, public transit, and energy infrastructure come from if the economy is stagnant due to increased costs of living and production?

This book does offer some interesting insights, and would probably make a good Reading Club selection. However, there is much more which should have been in this book (for example, a comparison to society before the Ford Model T changed us into a gasoline-combustion economy).
Posted by Torsten Adair at 7:52 PM No comments: