My Train of Thought Takes a Detour: Mike Tyson and Burt Reynolds

The other day, a colleague, who is not geeky but likes cool stuff, mentioned Comic-Con.

So I casually mentioned that Mike Tyson would have a cartoon show on Adult Swim, similar to the "meddling kids" trope perfected by Scooby-Doo.

It includes Mike Tyson, a ghost, a talking pigeon, and Tyson's 18-year-old adopted daughter, who is Korean.

So, of course, I pulled up the "You Meddling Kids" trope at TV Tropes.
I clicked on the "Western Animation" folder, to see how many examples existed from Hanna-Barbera.

Then I got to wondering...  did any of these "copy-dogs" ever cross-over with Scooby-Doo?

Yup.  Josey and the Pussycats.  Jeannie.  Speed Buggy.   But wait... who is Jerry Reed?  He shows up in Episode 14: "The Phantom of the Country Music Hall".

Jerry Reed was a successful songwriter and performer, best known (at least to me) as Burt Reynold's sidekick in "Smokey and the Bear".

But...  here's where it gets interesting!

He made his first movie in 1975, with Burt Reynolds:
W.W. and the Dixie Dancekings 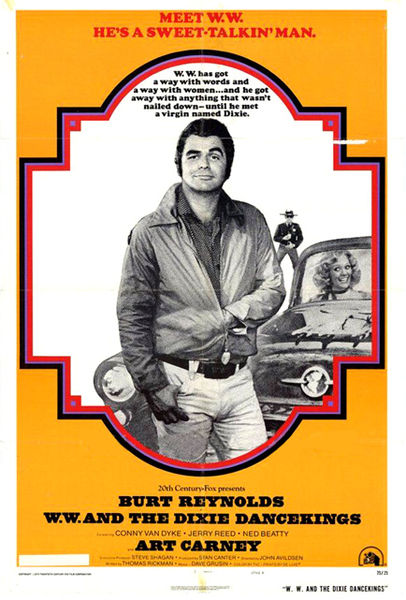 "As of 2013, the film has not been released on DVD or any other home video format."

!!! When my family bought a VCR in 1980, the first thing I noticed upon visiting the video rental store for the first time was the sheer selection of Grade-B,C, and Z movies available!  Stuff you might see on the Late Show, maybe once a decade.  Stuff that the actors themselves have forgotten.  (No, I didn't hit a high at that point...I was a naif.  I would plotz a few years later, when Blockbuster opened their first store in Omaha, featuring complete runs of Star Trek and many other examples of eye candy.)

Burt Reynolds was HUGE back then.  "Cannonball Run" and "Best Little Whorehouse in Texas" were hits.  And here's a Reynolds movie that was never released on VHS or any other medium.

Yes, the plot isn't much...  but check out this cast!
(Click on the names for Wikipedia articles.)

Conny Van Dyke... she's the love interest.  Nothing much interesting about her, aside from being signed to Motown Records as a caucasian!

Jerry Reed, we already covered above.

Ned Beatty... he's one of the great character actors of the 20th Century.  Best known as "Otis", Lex Luthor's henchman in "Superman".  (And the villain in "Toy Story 3".)

Art Carney...  best known as "Ed Norton" on "The Honeymooners".

Is there a soundtrack?  You betcha!  On vinyl!
There's also a novelization, which seems to be better than the actual movie.

My theory... Reynolds owns the rights to the movie, and keeps it locked away out of embarrassment.  (It currently has a rating of 5.8/10 on IMDB.)

Of course, there are bootleg DVDs out there.
Myself, this is the sort of movie you watch on cable TV late at night, preferably with a bottle of scotch.
---

Whoa...  interesting distraction!   "Jeannie", the cartoon version of "I Dream of Jeannie".  It's not named as an example of "those meddling kids" trope, but it is similar. 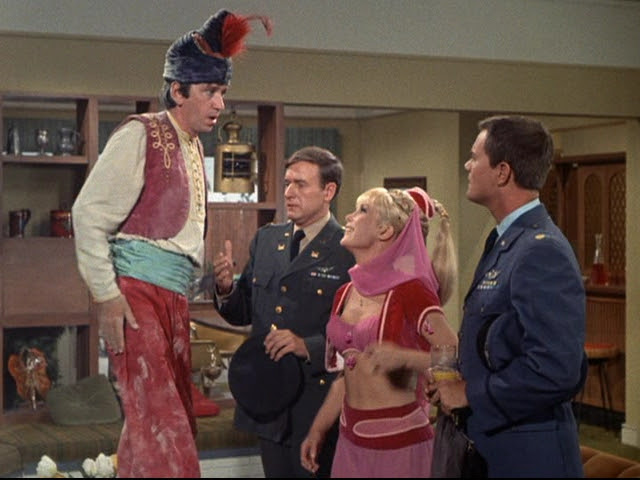 Is it me, or does his costume look like it was stolen from a flying monkey?

Posted by Torsten Adair at 2:45 PM No comments: