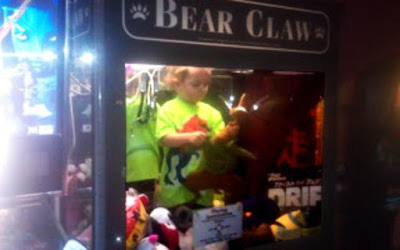 A 3-year-old boy somehow crawled up into a claw machine and was busy playing with the toys inside while his mother frantically searched for him.

Employees at Madsen's Bowling and Billiards in Lincoln said a customer alerted them that the young child was stuck inside the claw machine.

At the same time police were called to a home nearby on a report of a missing child. According to reports, a 24-year-old woman called 911 when she discovered her 3-year-old had slipped out of her apartment.

She told police that she was in the bathroom when the boy left through an unlocked door.

Meanwhile, Madsen's called police and the vending machine company to come let him out.

Employees said by the time the vending people arrived police had pieced the two situations together.

The boy was freed from the machine without any injury.

According to police, the mother acted quickly and appropriately as soon as she realized her son was missing and there were no indications of neglect. She was not cited.
Good thing they didn't have a candy machine.

So simple, a child could do it!

If you want that iPod, borrow a toddler.

"Dang… I got the toddler. I was trying for the Rastafarian banana."

That stork is soooo fired.

The latest design in playpens!

The mother wasn't cited, but authorities are wondering where the toddler got the fake ID he used to enter the bar.

"Damnit! Not again! Earl, call the exterminator! We've got toddlers in the claw machine!"

Parents can come get sloshed during the day while the child is safely ensconced in the “playpen”.

Authorities decided to check the ball pit at a nearby McDonald’s, where they found a heroin needle, three Happy Meal toys, a desiccated but edible Big Mac, and two teenagers engaged in heavy petting.

“Bartender, there’s a toddler in the claw machine.”
"Can’t be. I used them all in the barbecue."

"Doc… I have these recurring dreams where I’m a small child, and I’m on sale at the local Wal-Mart…"

It used to be, kids set up a sign and tried to sell their younger siblings. I guess this works better.

"Let’s go to Dave & Buster’s. Their claw machine has dachshunds."

At 5 PM, the bar replaces the toddler with a go-go girl.

"The Claw chooses who will go and who will stay."

Posted by Torsten Adair at 3:00 PM No comments: