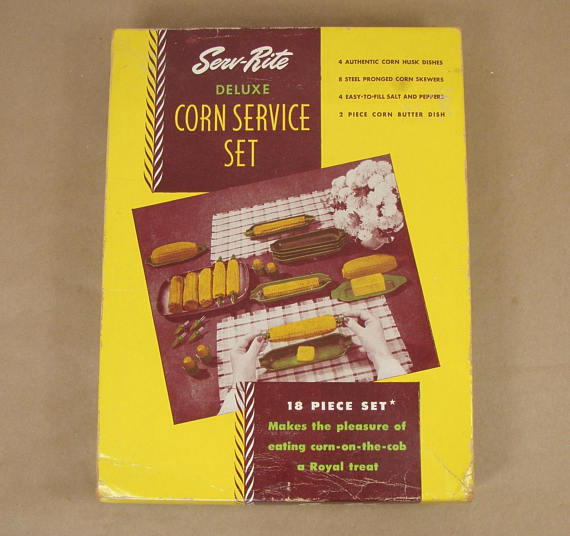 This, and cream cheese rosettes, are traditional and expected gifts at most weddings in the Missouri River Valley region.

Traditionally, a set belonging to grandparents is handed down as a family heirloom, although it can also given by the youngest member of the bridal party (and his/her family if the child is very young) to ease the burden of gift giving decisions.

The origins? Sometime in the early 1910s, as mass-produced tableware became common and affordable, and later, after Marshall Field pioneered the bridal registry in 1924. This set spread like wildfire in the agricultural midwest, with newlyweds receiving duplicates.
A simple system was created to avoid an gaffes of etiquette. It is considered gauche to place this item on a wedding registry. It is the Maid/Matron of Honor's responsibility to certify that the set will be gifted.

There are other traditions about the first use of the set. For some, it is the first meal prepared in a new home. Others wait for the first barbecue. (Yes, an outdoor grill is another traditional wedding gift in the American Midwest.)

Some invite the giftgiver's family over for a simple dinner, and inaugurate the gift then to show how useful it is.

The Brandeis art deco set (inspired by the Joslyn Art Museum) is still in production and sold by Yonkers (which acquired the Brandeis chain in the 1980s).

The Omaha Center for Industrial Design holds an annual scholarship auction where students, celebrities, and anyone else may design and produce a unique set. It is one of the rare banquet auctions to use cobshanks as part of the silverware. (The proper placement of the cobshanks in a table setting is perpendicular to the desert fork and spoon, next to the bread plate.)
The Nebraska State Fair (now located in Grand Island) issues commemorative cobshanks with each corn-on-the-cob sold.

A sterling set autographed by Nebraska football coach Tom Osborne sold at charity auction for $33,000 in 2008. The Governor's Mansion in Lincoln, Nebraska, contains a small collection of sets, which are on display as part of the public tour.

A giant cobshank (as the handles are known), designed by Claes Oldenburg, is on display behind the rest stop located near exit 280 on Interstate 80, funded and installed as part of Nebraska's I-80 Bicentennial Project. As some vandals have discovered, the sculpture includes the prongs, which are imbedded in a concrete slab reminiscent of a corncob.
Posted by Torsten Adair at 1:30 PM No comments: