Released in November 2009, the following video links most of the beloved children's characters from the BBC, along with some American characters who appear in the UK.

Most of these franchises are puppetry based. That's a rich tradition in British television, with The Thunderbirds best known in America.

For this video, most of the figures are animated using stop-motion techniques, with some "live action" video inserts (such as the Teletubbies and Thunderbirds).

The characters shown in the video connect directly to Scooby-Doo.
This also features a rare cameo from SpongeBob SquarePants!

According to Wikipedia, here is a list of the many series and franchises shown in the video:
Posted by Torsten Adair at 2:24 PM No comments:

I wanna know what love is, I want you to show me; or Love For Sale 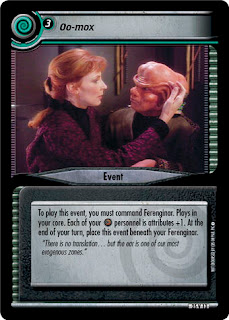 An alien lifeform appears in front of you.
It will allow you to travel with it.
However, you may not tell anyone of your departure. You might suffer injury or death while traveling.
To fund the travel, you must give it your most cherished possession, as the psychic emotional residue can be sold as a narcotic, and the object itself can also be sold. Do you go? What item do you give the alien?
What emotional connection does that object contain?
"Do you know what 'love' is?" you ask Qyz, the Chief Extractor.
"We have studied your society, and have made crude analogies, but like your best philosopher-poets have discovered, it is mostly inexplicable," xhe explains.
"Well... since you can harvest emotional residues, I wonder what would happen if we recycled sex toys?"
Three months later, after the purchase of a small habitable moon orbiting a gas giant 15 light years away...

"Hey, Qyz...what happens if we use the Siphon to collect the Love directly from humans?" you ask Qyz, Chairman of UngaCreega, Inf.
"We would need to create numerous fail safes, as well as explore the many variations of Love. Sex-Love alone has many variables...how do we find willing test subjects?"
"Let me make a few calls. Meanwhile, charter a cruise ship for... let's say...300 people, for Christmas next year."
"Will that be enough?"
"For now. Plus there's the crew. We should also start a foundation to fund research in emotional and sexual health. Why should we have all the fun?!"
Five years later, at the annual board meeting Qyz makes xir annual report...
"This galaxy, 162 light years away, recently acquired by our corporation, will be quarantined as a nature preserve, in the hopes that R&D might find new discoveries for us to offer our customer base.
"In the past cycle, we have expanded our emporia locations by 2.3%, including three new galaxies. While Earth itself is quarantined to ensure the safety of Galactic hegemony, we have been able to charge a premium for both direct and supplemental experiences involving humans throughout our territories, with other sentient species providing more accessible and affordable alternatives.
"Of the 459 known societal outbreaks directly caused by our presence on established worlds, only 97 will require direct physical intervention to preserve economic peace. Many conflicts can be readily resolved via the distraction of stimulation of base desires, which, of course, we excel at, and which further adds to our market dominance in the stimulation industry in each territory."
Posted by Torsten Adair at 1:00 PM No comments:

As part of the recent Animaniacs reboot, we've seen many "Merry Melodies" spots where the characters sing. [And since these are the same characters from the original Animaniacs, they share the previous linkage to Freakazoid and Steven Spielberg!]

In this short titled "Suffragette City", Dot begins to celebrate the centennial of women's suffrage, but then quickly learns that she, a cartoon character, has no such rights.
Thus begins her campaign to secure such rights for all cartoon characters!

If you'd like to sing along, here are the lyrics!

Cartoon characters which appear in this video (in order of appearance):

Posted by Torsten Adair at 4:00 PM No comments: