First, I must praise Suvudu, the SF/Comics/Fantasy/geek website run by Random House.

Being a big supporter of mainstream publishers publishing comics, I joined their merry band when they first launched. However, it was a distraction among an Internet of distractions, and I did not visit as often as I should.

Recently, they posted a rousing call from the satorial, erudite, and all-around-nice-guy Ali Kokmen. I was so moved, that I had to comment, yet my password was not accepted. Suvudu does not send email reminders, instead asks for a hint. Having just celelbrated the end of my fourth decade on this planet, I of course could not recall. (I'm working on the ear hair. I've started hiking my slacks up towards my naval, but will probably need a different cut of slacks. Preferably in plaid, preferably from Johnny Carson Apparel.)

However, a quick email to the general email address, and in less than an hour, my account was restored, my opinion known, and I added it to my blog reader, so I would not forget them in the future. Currently, they are running video from the Eisner Awards, and talking about zombies.

A Chinese cyber attack hits the Melbourne International Film Festival, after Chinese filmmakers left because a Chinese dissident and a documentary about her are to be featured... 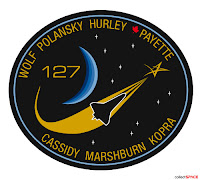 The Space Shuttle Endeavour has landed safely. Only seven flights remain before the Shuttle fleet is grounded. Not a bad record for almost thirty years of operation. Too bad they didn't build it this way... (Man! That's a pretty cool history! An origami space station, folded atop a Saturn V!)

NASA is also presenting a challenge: develop an airplane which flies at a speed of at least 100 miles per hour, and flies at least 200 miles per gallon per passenger. (The A380 could reach 80 MPG/P, if filled with 800 (!) passengers.) The prize? $1.653 Million. (Not to mention the numerous contracts from the commercial production of the technology.)

And although the STS-127 patch is in the public domain, I did grab the graphic from CollectSpace.com, which has an incredible discussion on this and many other patches. (Search and you'll find a future connection between NASA and Star Trek!)

What else? Oxygen was discovered today, in 1774, for the third and last time. As with most product development, it would not be properly named until 1777. Oxygen is a chalcogen. (No idea what the root "chalcho-" means.)

The Swiss Confederation was created today in 1291. It has not been at war since 1815, it has the sixth highest GDP per population, it's an easy place to do business, has low taxes, and high life expectancy due to federally funded health care. And it is practices a form of government which is more democratic than the United States of America.

Oh, yes... almost forgot... MTV began broadcasting today in 1981. The first video played on MTV? The Space Shuttle Columbia preparing for liftoff, which lasted one hour, culminating in the iconic "spaceman" logo and The Buggles. (The original footage is available for viewing at the Paley Center for Media.)

And for more history from today, Try the BBC.

Posted by Torsten Adair at 1:16 PM No comments:

Okay... rambling today... not much rhymer reason, just some cool geek goodness from the West Coast:

First, The Examiner has the trailer for Tron: Legacy. Looks cool, even without sound, at credit card size. I think the set design will gain an Oscar nod, as will probably the score. After you watch the YouTube file, there are seven other video links underneath. Nothing much to see. Oh, did I mention it will be Disney 3-D? In IMAX? Yeah... Hope they clean up the original and show that first.

Here's another cool video... a game called "Ratchet & Clank" involving time travel recording to solve puzzles. Just watch... pretty cool idea. You play with yourself. (No, not that way...geez...)

And another, more fanboy centric photo gallery. Lots of cheesecake, some terrible photography. (Really... you've got a digital camera...you can see the result instantly. If it's out of focus or blurred, take another.) 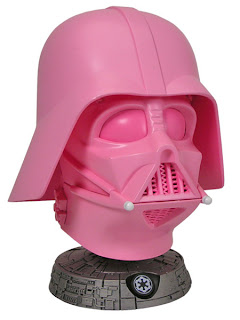 There are lots of cool exclusives available at the Con, but the coolest is from Gentle Giant. A bubble-gum pink Darth Vader helmet! From their site:

A pop culture icon, if there ever was one. The classic Darth Vader helmet gets an overhaul, and a new PINK paint job for a very important cause. For every pink Darth Vader helmet sold from July 1 - July 26, 2009, Gentle Giant Ltd. will donate 10% of the retail sales price to Susan G. Komen for the Cure® with a minimum guaranteed donation of $5,000, in support of Komen's promise to save lives and end breast cancer forever.

This reminds me of another "limited edition", when Kenner ran one hundred of the Darth Vader Collector's Case through the assembly line to see if the gold coating for the See-Threepio (C3-PO) Collector's Case would work. Yeah, it looks cool.

Geek Dad, over on Wired's website, didn't go to Comic-Con this year, and posts ten excuses. Even better, 100 things today's kids will never experience. The comments list is worth reading.

Many noted the "Revenge of Moore" squids off the coast of San Diego. A few days later, I discovered a similar news item of a shark in Miami, which reminded me of an early Astro City story.

And while I'm using Google News, here's the earliest citation I can find for a mention of the San Diego Comic-Con: a UPI dispatch from August 4, 1974. Whatever happened to "Captain Sticky"? His obituary.

And remember all that fuss about how Twilight and girls were ruining Comic-Con? Here's an AP article about a (then) young female fan from Washington State.

It was at the San Diego convention where she purchased her most valuable book, a copy of of the first issue of Spiderman [sic], which sold in the early '60s for 10 cents. She paid $75 for her copy.

"I couldn't pass it up for that price," she said, adding that it will be worth a couple hundred dollars someday.

It originally cost twelve cents. According to Heritage Auctions, a 2/10 rated issue is worth $2400. You can buy one here.

Posted by Torsten Adair at 5:45 PM No comments: